After rocking debut in Berryville on September 19th, the Bitter Liberals will open for James McMurtry in Waterford on November 3rd.

The concert is open to the public. Tickets are available in advance for $30.

We really hope to see you there. Tell them you came to see the Bitter Liberals! Please spread the word. 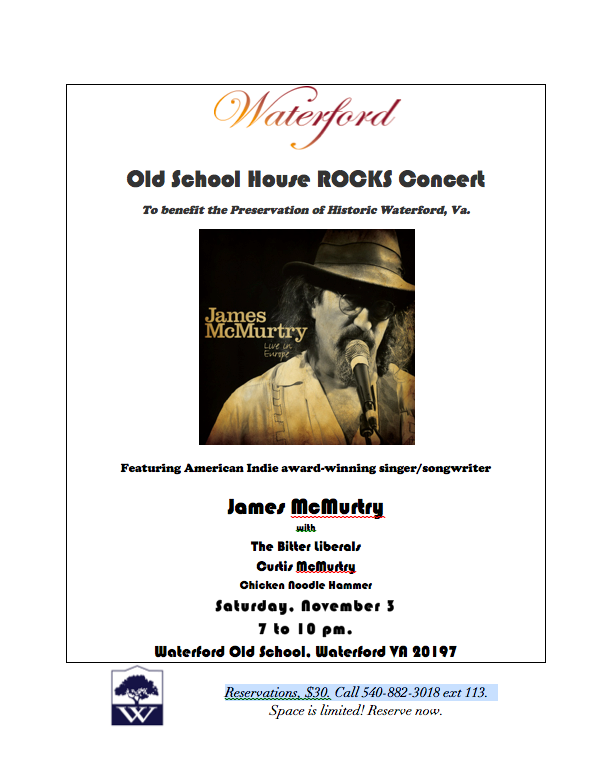 The Bitter Liberals have a long and convoluted musical history

Allen Kitselman – guitar
Singer/songwriter/guitarist ALLEN KITSELMAN was raised in Waterford, Virginia where he started playing music at the age of 9. In 1984, after graduating from Virginia Tech in Architecture, and returning home to live on an Angus farm, he was a founding member of the band, Genghis Angus. In its 15 year life span Genghis Angus created three full length recordings and one EP working with Producer, Mike Wanchic in Bloomington, Indiana. The band toured nationally for several years and performed on Mountain Stage and E-Town. The final recording, “12 Days” was featured on MTV’s The Real World- Hawaii. Kitselman writes songs from a very personal vantage point. He is a Bug Music, NYC writer. He retired from the musical performance in 1999 to concentrate on his Architecture practice and family, but continued to write music and experiment with alternative guitar tunings. In 2011 he encountered the opportunity to play with three kindred musicians and decided to return to performance. He is a practicing Architect and Town Councilman living in Berryville, Virginia with his wife, Laura and son, Dylan. He is a Bitter Liberal.

Clark Hansbarger – guitar
CLARK HANSBARGER began playing in DC bars in the early 70′s with Ambrose Rose, a patchwork jam band that fit the times. After that, because he hated playing covers, he wrote and played originals for over a decade with the Leesburg concert rock band Hammer. Their power chords still resonate in the walls of Buchanan Hall. Clark still plays and records regularly with the roots band The Bastards of Twang, a roving compilation of some of northern Virginia’s wiliest musicians. He is a Bitter Liberal.

Mike Jewell – percussion
MIKE JEWELL has been playing music since he was little. The beginning was church choir because Mom said so. Nova the band from 1972-1981. The James Boys 1978-1982. Genghis Angus 1982-1995. Less Travelled 1994-1999. Reverend Hookems 2000-2007. Bryan Fox and Gary Smallwood Band 2006-2010. The Greenbeets 2010-to now. Add in many thrown together gigs with PRS stunt guitarist Mike Ault. And just to name a few other fine musicians, Mike has played with: Leonard Stevens, Craig Gaskins, Benji Porecki, Gary Grainger and so on, forever. He is a Bitter Liberal.

Gary McGraw – fiddle
GARY MCGRAW has played the violin since he was 3 years old (over 43 years for those of you counting). He started learning by ear using the Suzuki
method in Tennessee, touring in 1976 with Shinichi Suzuki himself and playing in Carnegie Hall, the Kennedy Center, the Omni, and Disney World. During high school in Texas and Tennessee, Gary played in all state orchestras all four years. He also toured Europe with a youth orchestra playing in Carnegie Hall a second time, Notre Dame Cathedral, and Royal Albert Hall (among other venues). Gary learned to improvise in college at the University of Virginia where he played for the first time with Rhine Singleton in 1985. He played with the Charlottesville Symphony for four years during college as well as playing out in Charlottesville with Grassroots. During grad school and after, Gary picked up the mandolin and worked hard on improvisational style. He played with Gricklegrass for a couple of years in all the bars in Winchester, Va. His band Where’s Aubrey gradually coalesced into existence in the mid-90s and began recording all original music in 2001. Where’s Aubrey has recorded 6 CDs. Since 2006, Gary has attempted to channel Stephane Grappelli with Hot Club Millwood. He also plays fiddle with Rogues Gallery. Gary plays a violin made in Paris between 1750 and 1800—a Gagliano clone. His mandolin is a Flatiron. While not playing music, Dr. McGraw raises two boys with his wife Amy Barley, writes books about software security, and helps run Cigital. He is a Bitter Liberal.