The Bitter Liberals have a long and convoluted musical history. 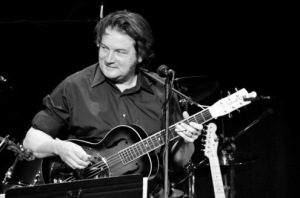 Allen Kitselman – guitar
Singer/songwriter/guitarist Allen Kitselman was raised in Waterford, Virginia where he started playing music at the age of 9. After graduating from Virginia Tech in Architecture, and returning home to live on an Angus farm, he was a founding member of the seminal Virginia band, Genghis Angus. Genghis Angus released 4 albums and worked with Producer, Mike Wanchic (Mellencamp). The band toured nationally for several years and performed on Mountain Stage and E-Town. The band’s, “12 Days” was featured on MTV’s The Real World. Kitselman writes songs from a very personal vantage point. He is a Bug Music writer. He retired from the musical performance in 1999 to concentrate on his Architecture practice and family, but continued to write music and experiment with alternative guitar tunings. In 2011 he encountered the opportunity to play with three kindred musicians and decided to return to performance. He is a practicing Architect and Town Councilman living in Berryville, Virginia with his wife, Laura and son, Dylan. He is a Bitter Liberal. 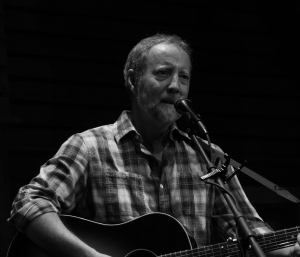 Clark Hansbarger – guitar
Clark Hansbarger began playing in DC bars with Ambrose Rose, a patchwork jam band befitting the times. After that, because he hated playing covers, he wrote and played originals with the Leesburg rock band Hammer. Their power chords still resonate in the walls of Buchanan Hall. Clark still plays and records regularly with the roots band The Bastards of Twang, a roving compilation of some of northern Virginia’s wiliest musicians. He is a Bitter Liberal. 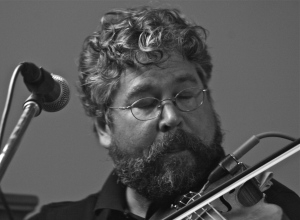 Gary McGraw – fiddle
Gary McGraw has played the violin since he was 3 years old. He started learning by ear using the Suzuki method in Tennessee, touring with Shinichi Suzuki himself and playing Carnegie Hall, the Kennedy Center, the Omni, and Disney World. During high school in Texas and Tennessee, Gary played in all state orchestras all four years. He also toured Europe with a youth orchestra playing in Carnegie Hall a second time, Notre Dame Cathedral, and Royal Albert Hall (among other venues). Gary learned to improvise in college at the University of Virginia where he played for the first time with Rhine Singleton.

He played with the Charlottesville Symphony for four years as well as playing out in Charlottesville with Grassroots. During grad school and after, Gary picked up the mandolin and worked hard on improvisational style. He played with Gricklegrass for a couple of years in Winchester, Va. His band Where’s Aubrey gradually coalesced into existence and began recording all original music in 2001. Where’s Aubrey has recorded 6 CDs. Since 2006, Gary has attempted to channel Stephane Grappelli with Hot Club Millwood. Gary plays a violin made in Paris between 1750 and 1800—a Gagliano clone. His mandolin is a Flatiron. While not playing music, Dr. McGraw lives on a farm outside of Berryville, writes books about software security, and is very bad at retirement. He is a Bitter Liberal. 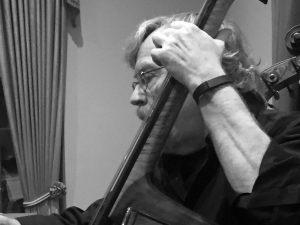 Michael Rohrer – bass
Michael Rohrer’s first instrument was a ukelele at age 6. He soon graduated to a Roy Rogers guitar, and finally a real guitar when his hands were big enough. In high school, he played trumpet in the concert band, even soloing with the famous Carnival of Venice trumpet showpiece in his senior year. Meanwhile, he was learning finger style guitar and bass guitar, inspired by the playing of Peter, Paul and Mary, Paul McCartney and the other great musicians from the ’60s. He played guitar through college, and even so, got his degree in Electrical Engineering and Computer Science, got married, bought a house in Blacksburg, started raising two kids and didn’t have a lot of time for playing music. After he moved to Loudoun, he started playing again. Returning from a gig at a wine festival in Page County on a beautiful fall afternoon, he had an epiphany and realized that playing music was what he was meant to do in life. For several years, he studied classical bass with Bob Oppelt, NSO principal bassist, and has played in numerous orchestras since then, in venues including the Kennedy Center and Constitution Hall. He is currently principal bass with the Loudoun Symphony and the Pro Arte Chamber Orchestra. He also plays in the Washington Sinfonietta and the Symphony of the Potomac as well as numerous freelance and chamber music venues. Through the years, he has enjoyed sitting in with bands like the Bastards of Twang and the Curve Crew whenever he gets the chance. He also plays an Eb Sousaphone, and was a founding member of the Lincoln Dixieland Jazz Band. He is a Bitter Liberal. 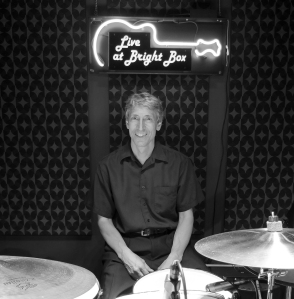 Nick Schrenk – drums
Nick Schrenk began playing drums at the age of 9 after receiving a snare drum from his parents for Christmas in 1970. He joined Nova, his first rock ‘n’ roll band, a few years later, playing covers as well as original material. Since then, Nick has played in a variety of musical projects in Northern Virginia. Oil Can Harry & the Dirty Squirts and Smokin’ In Bed were bands that specialized in electric Blues. Jumptown, an 8 piece ensemble with horns, enjoyed an enthusiastic following in Northern Virginia, Maryland and Washington, DC, playing old school R&B music by such greats as Bobby Bland, B.B. King and Little Milton Campbell. Nick made his first foray into Jazz when he joined The Dominion Jazz Quartet while still a member of Jumptown. The DJQ featured two guitars, upright bass and drums. Nick is excited to be reunited with his childhood friend and band mate Allen Kitselman. He is a Bitter Liberal.

Contact the Bitter Liberals by sending email to thebitterliberals@gmail.com.