The Bitter Liberals are coming home with two local shows on the calendar! We will be performing Clark Hansbarger’s Dream of a Good Death first at the Mt. Zion Church in Aldie, Virginia. Here are the details:

We recommend getting your tickets for the Aldie show as soon as possible. The venue has limited capacity. 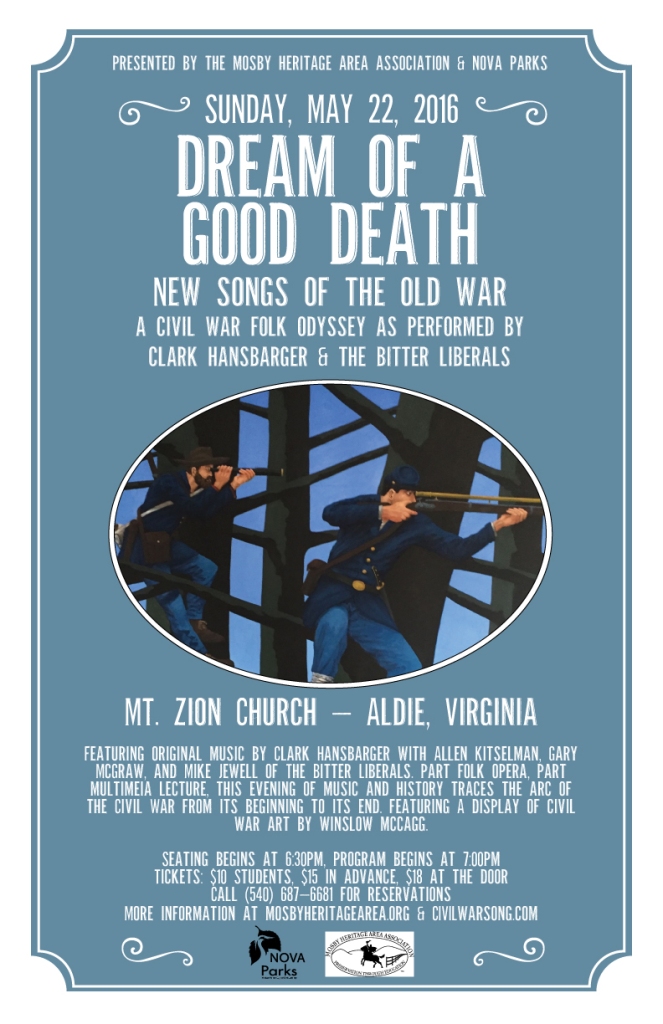 A folk opera of sorts, Dream of a Good Death, was inspired by Drew Gilpin Faust’s book This Republic of Suffering. This cycle of original songs follows the trials, hopes, fears and sacrifices of Confederate soldiers as they struggle through the Union conquest of Port Royal, the fires in The Wilderness, the killing fields of Gettysburg and Cold Harbor, and the long sieges of Vicksburg and Petersburg.

Historian Howard Means describes the show as “one of the most imaginative approaches to the Civil War I’ve ever witnessed. The songs, all original, each tell a poignant story. Hansbarger’s between-songs narrative fills out the background eloquently, and the accompanying visuals help give the war’s horrors and heroes a human face. The theater was packed… In short, terrific entertainment — the rare evening that leaves you better informed and fully satisfied.”

The performance will also feature a display of Civil War paintings by Winslow McCagg. You know how we feel about artistic cross-pollination!

Then in early June, a real homecoming: The Bitter Liberals will play a show in Berryville at the Barns of Rose Hill Saturday June 4th. Tickets for that show are available in advance here. Get them now.